The Smolny Cathedral is a part of the architectural ensemble of the Smolny Convent, located in St. Petersburg, on the left bank of the Neva River. The Smolny Cathedral and Smolny Convent are built in the Baroque style under a decree of Empress Elizabeth, who had intended to retire to a monastery in her old age. The ensemble was built by the architect Francesco Bartolomeo Rastrelli, and it was the last work of the great architect. Construction of the cathedral started in 1748, and the interior decoration was completed only in 1835. July 20, 1835, Smolny cathedral was consecrated as a cathedral of all educational institutions in the name of the Resurrection of Jesus Christ. In 1764, the monastery's spare areas were opened Russia's first school for girls of noble origin — Institute for Noble Maidens. The Institute was founded by I. Betskoy — one of the most educated and active nobles during the reign of Empress Catherine II. Over time, the Smolny Institute became the most prestigious institution for women. The Empress became a patroness of the Institute, and she personally attended the final examinations. In 1806-1808, to the south of the convent was built a special building in the classical style by architect Giacomo Quarenghi for the Smolny Institute for Noble Maidens. 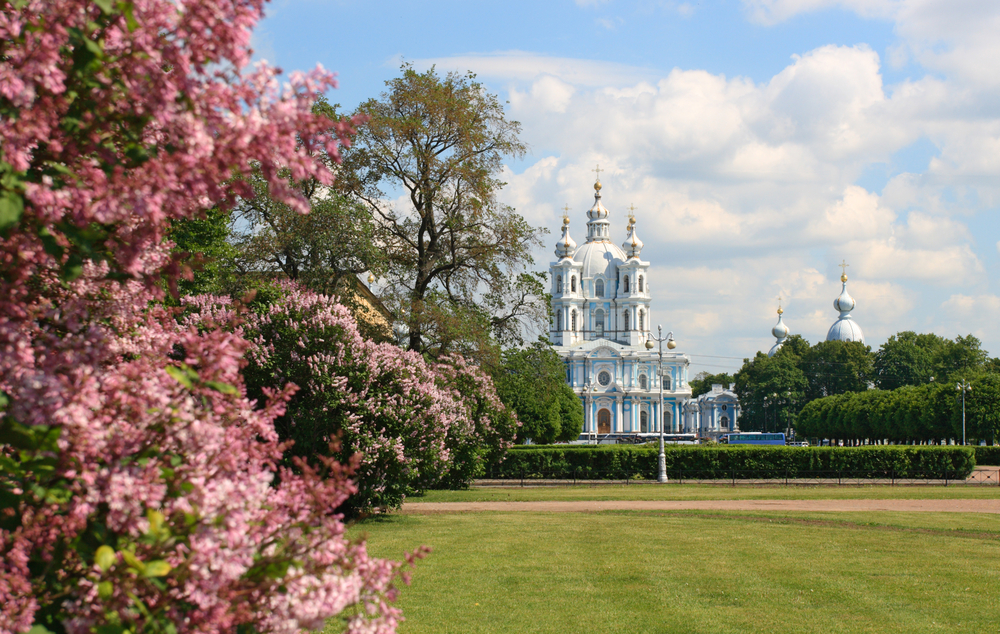 Vertical dynamics penetrate the composition of the Smolny Cathedral. Rastrelli enriched relief of facades with three-quarter columns not used earlier in the architecture of St. Petersburg. The ensemble of the convent features scenic wealth, close in spirit to old Russian architecture, combined with the strict symmetry and regularity of Petersburg. Architect V. Stasov directed the Interior decoration of the Smolny Cathedral. The cathedral interior was simple but solemn: a huge church hall was decorated with marble, there were built three magnificent iconostases, the faceted crystal balustrade was set in front of the altar, and the pulpit was decorated with the finest fretwork. After the Revolution of 1917, the cathedral's interior was significantly damaged: the iconostasis, crystal balustrade, and preaching pulpit were broken and plundered. The cathedral was turned into a storehouse. In 1990, the concert and exhibition complex opened in the Smolny Cathedral, which is still located there. The Smolny Convent of the Resurrection is the Brightest example of the late Baroque, and it is considered one of the most beautiful buildings not only in St. Petersburg but in Russia.